What is it like to know you will get Alzheimer’s disease?

Dr. William Nash knows because he is facing that diagnosis himself. Alzheimer’s is a progressive neurodegenerative disease for which there is no cure and the end result is death. Dr. Nash shared his experience and the experience of several family members during his presentation at the Belton Senior Expo 2015. He began his address by asking everyone in the room to raise their hand if they knew someone who was experiencing Alzheimer’s. Nearly 100% raised their hands. Dr. Nash has already lost his mother and younger brother to the disease and has been diagnosed with early mild cognitive impairment (MCI) amnestic type that is thought be possibly due to Alzheimer’s disease. 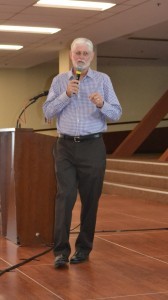 Dr. Nash, a family physician, has practiced the past 25 years in Arkansas, Temple and Austin until 2010 when he received his diagnosis. Dr. Nash immediately retired from his family practice. He currently participates in a long-term study called the Alzheimer’s Disease Neuroimaging Initiative (ADNI) and is an Alzheimer’s disease advocate. The ADNI is the largest and most important Alzheimer’s study to date.

Dr. Nash willingly tells his story, using it as a vehicle to discuss what work should be done, what new testing is available, what treatments are available (now and in the future) and what new research is being conducted. He chronicles his struggle on his blog http://www.organicgreendoctor.com/ . Dr. Nash admits to the occasional emotional moment but cannot pinpoint if that is due to the disease or to the medicine he takes to combat it. He also admits that sometimes when he looks in the mirror, he sees his brother and he knows the future that is in store for him.

When asked how he communicates his ups and downs with his family, Dr. Nash responded that most of what he has to tell them is actually in his blog. It is easier that way. He has geared his blog toward them whether they realize that or not. It is a way to express himself without becoming too emotional about it. Dr. Nash knows they struggle as well. In fact, he believes that the role of caregiver is the hardest one of all.

Dr. Nash then discussed several of the areas of study that are currently being conducted. One area of research revolves around beta amyloid which is a specific plaque located in the brain. Some research shows that this tends to accumulate in the brain and over time, less of it is found in the spinal fluid. Once a patient’s spinal fluid begins to show a decrease in this peptide preventive measures should begin. 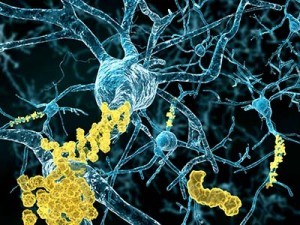 Amyloid plaques (yellow) building up in the brain.

Another brain component important to proper function is tau protein. However, it acts exactly opposite to beta amyloid. Over time, the tau proteins in the human brain begin to unravel sort of like thread and leak into the spinal fluid. Once a patient’s spinal fluid begins to show an increase in this protein, preventive measures should begin. 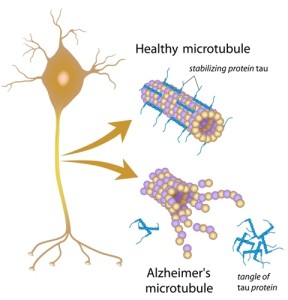 Dr. Nash then mentioned gene testing for APOE. Everyone has two copies of this gene and the risk varies with which type and combinations of types of APOE a person has E2, E3, OR E4. Current studies show that E2 is the rarest form of the gene and actually seems to lessen the risk of Alzheimer’s. E3 is the most common and does not seem to have much influence on the disease. E4 is only found in 20% of the population and it poses the greatest genetic risk. While having E4 does not absolutely guarantee that person will develop Alzheimer’s the risk is increased significantly. Dr. Nash informed the audience that has a combination of E4-E4. Dr. Nash believes we are just a few years away from more accurate testing.

So what can a person do to help stem the tide or slow the onset? Dr. Nash recommends controlling blood pressure, lowering cholesterol, controlling diabetes, watching depression and anxiety levels, and eating a Mediterranean diet. While these things will not prevent the disease, it is wise to be proactive and take care of one’s health. If you believe you are at risk for getting the disease, get tested and start working with a physician to see which course of treatment would be best for you. 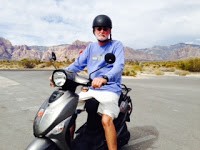 Another key component that Dr. Nash conveyed to the audience is the importance of staying active. He and his wife live on ten acres in rural Burnet County where they enjoy green living, collecting rainwater for their personal use, and generating solar power for most of their electrical needs. They also enjoy organic gardening, hiking, traveling, and volunteering for Habit for Humanity and Meals on Wheels.