HomeNews2016: The Year of the Veteran

George P. Bush, Texas Land Commissioner, dropped by the Central Texas Council of Governments to meet with Bell County Veterans Services Officer (VSO), KC Hawkins, and talk about the various programs offered to veterans by the Texas General Land Office. Bell County Judge, Jon Burrows, was on hand to introduce Mr. Bush and commented that he was a recipient of a Veteran Land Board loan back in 1977. 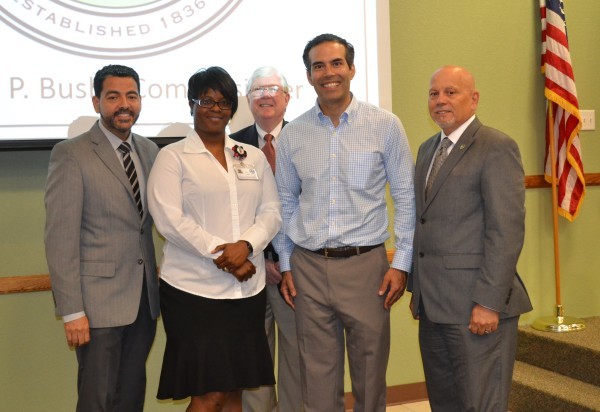 Commissioner Bush is traveling the state and meeting with as many VSOs as he can. His goal is to spread the word about the programs his team offers because so many veterans are not aware of many available services.  The veterans’ programs of the Texas General Land Office (GLO) are so well-respected that many other states are attempting to replicate them.  The GLO is the oldest state agency in Texas, older than the State Legislature and even older than the Governorship.  In fact, it can be said to be the very foundation of Texas itself.  The founding fathers of Texas set a wonderful precedent when they set aside mineral rights and real estate to generate revenues that would be used to serve our schools.  In addition, the GLO manages a collection of over 40 million documents some of which contain the very first uses of the word “Texas” and some that are dated as far back as the 16th century when Texas was still under the rule of the Spanish crown.

It is that spirit of independence that Mr. Bush would like us to harness and use more fully in preparing for the next big storm. Texas is the only state with no Corps of Engineers Compliance Plan.  A lesson well-learned after the $32 billion in damages caused by Hurricanes Ike and Dolly.  Currently, the state is close to completing that plan which is a good thing since one-third of all Texans live on or near the coast and Texas is the source of one-third of our nation’s oil reserves.

In addition to those programs, Commissioner Bush is making this year, “The Year of the Veteran.” He stated that Bell County knows how to care for her veterans and it is in the partnerships with non-profits where the highest levels of service can be found.  The GLO is proud of producing healthcare for veterans in their twilight years by maintaining eight healthcare facilities and four cemeteries.  The state has recently added PTSD and TDI mental health awareness programs to their list of services and received the Best State Operator Award.  In addition, the state has been able to lower their costs to veterans and waived the spouse interment fee in their cemeteries.

Mr. Bush is making an effort to get out of the capital city and bring this message to the veterans. He has already toured Fort Hood and his team has examined the separation process for veterans who are leaving the military.  While the GLO faces many challenges such as data collection and reaching the rural population, Bell County is the second highest performing county in the state.  The number one county, Bexar, has four to five times the population of Bell which further reiterates the great job Bell County is doing in keeping her veterans connected to these much-needed services.

The Q&A session which followed the presentation allowed the attendees to share their ideas with Commissioner Bush on how to spread the word about these services. Suggestions were made about using the separation process and even educating local realtors to tell their veterans to seek funding for land through the Veterans Land Bureau since most commercial banks will not finance raw land.  Once veterans become consumers of one or two programs, that leads to an increased awareness of additional programs.  In addition to the GLO, the Texas Veterans Commission and the Texas Workforce Commission are also great sources of information for veterans.

What to do if your GPS sends you to the wrong address?