Is Your Heart Beating a Little Fast…too Fast? How do You Know?

Atrial fibrillation (also known as AFib) is a very common problem but is also very complex according Dr. Javier E. Banchs, Director of Electrophysiology and Pacing for the Central Division, at Baylor Scott & White. Dr. Banchs spoke during the 2015 Belton Senior Expo explaining that four million people in the US suffer from AFib, 50% of strokes are connected to the disorder, and over 100,000 people die each year due to AFib.  What is AFib?

How do I know if I have AFib?

You may experience palpitations (butterflies, uneasiness), lightheadedness, difficulty breathing, fatigue, and may even pass out. However, some people never experience any visible symptoms! The rhythm can be intermittent and very elusive.

Why is AFib a problem?

The heart is a muscle and like any other muscle in the human body, working too fast for too long will cause the heart to fatigue. Thyroid disorders and chemotherapy have also been known to cause inflammation of the heart leading to AFib. If the problem goes undiagnosed, it can lead to heart failure and stroke.

Normal people, those with hypertension, the aged, those who suffer from diabetes, heart disease, thyroid disease, those who abuse alcohol, and those who have sleep apnea. Most of the time, the exact cause of AFib cannot be pinpointed.

How do we treat it?

Unfortunately, there is no permanent solution. There are some specific areas of treatment such as:

How do physicians decide who receives blood thinners?

Several factors are considered such as age, history of previous stroke, gender, evidence of high blood pressure, history of diabetes, etc. One in ten people will suffer a stroke. However, there is no way to tell which patient will and which patient will not so the most routine plan of action is to suggest blood thinners. Because this 1-in-10 percentage may not be worth the risk for everyone, this is a decision to be made on an individual basis after much discussion between patient and physician. 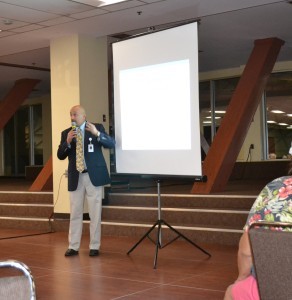 Why is it necessary to control the heart’s rhythm?

Some patients can be very symptomatic leading to a poor quality of life. There are some who do not seem to respond well to medications requiring alternative courses of action.

What is the best course of action: medicine or catheter ablation?

At this point, it is hard to determine which treatment is best. Both methods have an 80% success rate. Of that 20% who do not have initial success using either system, 10% of those can be improved with additional medications.

The key point to remember is that AFib is a recurring problem. It will come back no matter which line of treatment a patient accepts. Close monitoring is crucial and patients should keep a heart diary.

Dr. Banchs ended his presentation by encouraging everyone to apply the following steps once a person is diagnosed with AFib: